May 08 Posted by Staff Writer in News 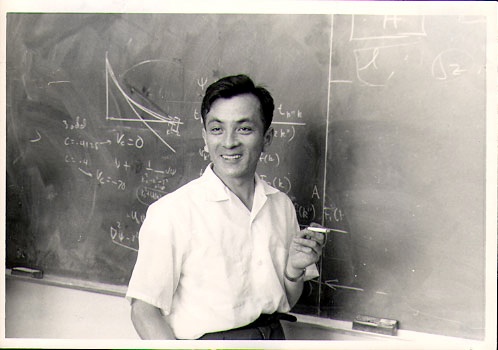 Monday and Tuesday of this week, the Department of Physics with Osaka University in Japan are jointly holding the 12th Tamura Symposium on Lepton and Baryon Symmetry. The symposium honors the legacy of the late distinguished nuclear theorist Taro Tamura, a veteran of UT Physics.

The meeting brings together researchers from Japan and the United States for discussions about particle physics, focusing this year on some of the latest findings about the symmetry properties of elementary particles.

Each time the symposium is held its focus is promoting international exchange around activities that involve both Japanese and U.S. physicists, including physicists at UT Austin. Experiments on neutrino oscillations and searches for neutrinoless double-beta decays and muon-to-electron conversion are a key area of focus this year, under the leadership of faculty member Karol Lang.

Tamura, a Professor of Physics at The University of Texas at Austin from 1966 to 1985, was a distinquished theoretical nuclear physicist who made important contributions to the theory of nuclear reactions and nuclear structure. He was passionately interested in close scientific cooperation between scientists in Texas and Japan, working tirelessly in his latter years to further collaborations between his theory group and counterparts in Japan.

To honor his memory, shortly after his death in 1988, Tamura's family, friends and colleagues established the Taro Tamura Memorial Fund for UT-Japanese Scientific Collaboration.

To see a program, list of speakers, and discussion topics for the 2017 event, visit the symposium website.

For more about Tamura's legacy as a physicist, see the UT Physics History Project memorial page for him.