Aug 17 Posted by Mary A Holt in News 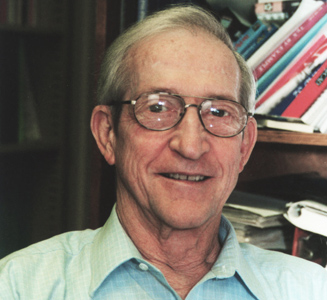 The American Association of Physics Teachers (AAPT), the preeminent society for the support and development of physics education, has initiated a special program to identify and recognize people who have contributed significantly to physics education. The first cohort of AAPT Fellows includes our John David Gavenda, David to all his friends and currently a Professor Emeritus at the University of Texas at Austin.

David, a native Texan from Temple who earned a BS and an MS from our department, returned in 1959 as an Assistant Professor after completing a Ph.D. at Brown University. During his 40 years of active teaching, research and service at the University of Texas, David has compiled an outstanding record of contributions to the advancement of physics instruction in higher education and the development of new knowledge in the field of condensed matter physics.

He has been a leader in course and curriculum development in physics at the local, state, and national levels. For his efforts, he was awarded the Robert N. Little Award for "outstanding contributions to physics in higher education in Texas" from the Texas section of the AAPT in 1989 and the College of Natural Sciences Advisory Council Teaching Excellence Award in 1994. He also received a Distinguised Service Citation in 1997 from the national American Association of Physics Teachers. He developed an experimental course in physical science for Liberal Arts students; developed one of the early computer-based introductory physics courses for science majors; and, has directed academic-year institutes for high school science and mathematics teachers. Prof. Gavenda’s special contribution to physics education was recognized by his joint appointment as Professor of Physics in the Department of Physics and Professor of Education in the College of Education. He was among the founding members of the graduate program in science education.

David’s research has concentrated on the interaction of conduction electrons with lattice vibrations in metals. His latest work has been directed toward the use of surface acoustic waves to study the properties of electrons near the surfaces of metals. He has published more than 40 papers in refereed journals on these topics. He has completed a monograph with Dr. V. V. Gudkov of the Russian Academy of Sciences entitled "Magnetoacoustic Polarization Phenomena in Solids". This monograph is a modern look at the field of magnetoacoustic polarization--a field in which he performed the early work.

His membership in the inaugural cohort of Fellows of the American Association of Physics Teachers is recognition of his unique role in the development and improvement of the instruction of physics at both the university and secondary level. Well deserved.